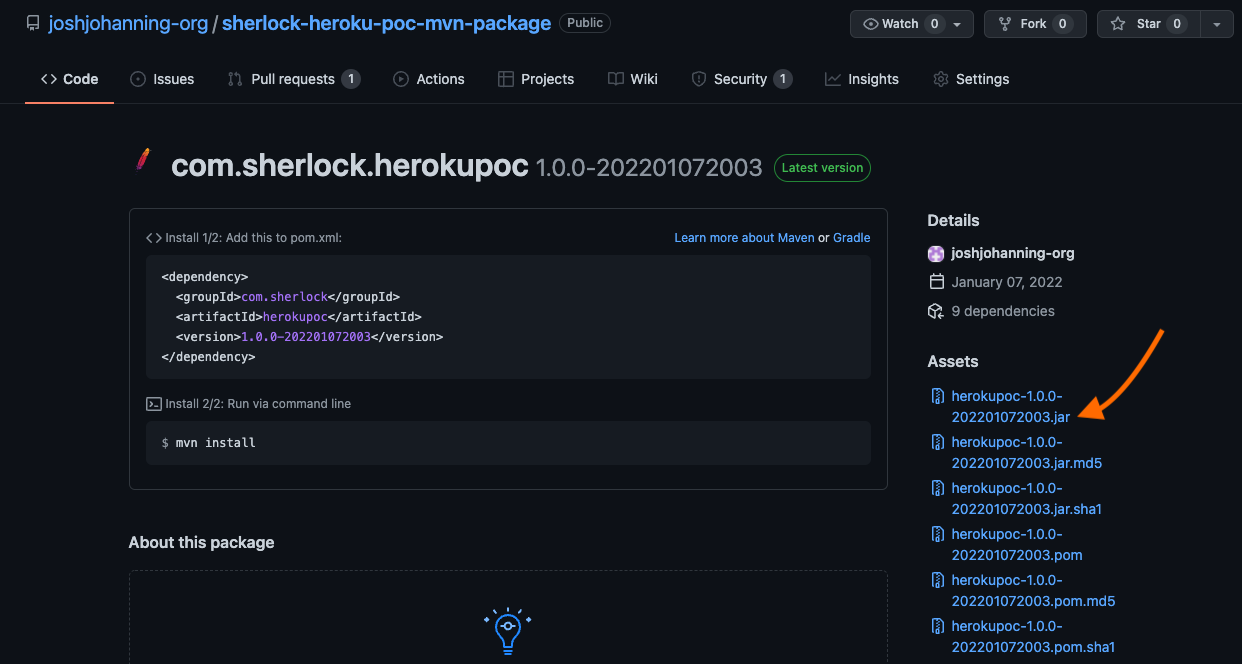 We had a team that wanted to push to GitHub packages, which is relatively easily enough to do and is well documented. However, they had a subsequent job that was building a Docker image where that dependency (the .jar or .war file) was needed.

There are a couple of different ways you could think about this.

1) Maybe the docker build step should occur in the same job as the mvn build step so that it has access to the same binary outputs 1) Perhaps instead of GitHub Packages we create a Release on the repository - we can use an Action to do this and an API to download the release 1) If we really just want to download the package binary from GitHub Packages…that should be simple enough, right?

Just use the Packages API, right?

The API for GitHUb Packages says:

With the GitHub Packages API, you can manage packages for your GitHub repositories and organizations.

Keyword: manage, such as listing or deleting packages. It doesn’t really imply downloading or retrieiving package assets like the Release API has.

Okay, but can’t we just go to the package in the UI and copy the download link?

Nope – check the URL of one of the files in my repo:

After spending a few hours on this, there were a few ways I found to do this with various levels of monstrocities committed in finding. I’ll start with the best / easiest and work my way down.

In hindsight, it’s so simple, yet it’s not documented anywhere! I was trying to use the mvn dependency:get/copy cli and kept getting stuck on a ‘401 unauthorized error message. In the logs, I saw the URL to the .jar` file I was trying to download and decided to paste that into my browser. I received a username/password basic auth prompt, and I simply pasted in my PAT as a password and I was able to download that file.

Extrapulating to curl, this was how to replicate this in the command line:

And because my biggest pet peave is when someone has this awesome blog post but then hides/obfuscates all the good stuff, here’s my actual CURL command I used to download a file:

The -L is important here as this tells curl to follow redirects. Without it, you’ll get a ‘301 Moved Permanently’ because it’s trying to use use the expanded URL as mentioned above. If you added the -v option to the command, you would see a similar long URL that our curl follows the redirect to.

You can also query against the GraphQL Endpoint. It’s not pretty, but here are my examples:

This is an example output of that query:

To retreive the URL you can curl, the jq is something like:

This is how you can run this GraphQL command via curl and jq to output the download url (generated from Postman):

If you need to grab a specific version, you can use the following GraphQL query:

I was able to get something like this to work - see my GitHub Action job below:

This is what we were originally trying to do, so thought I would throw it in here to spur other ideas for other languages. We were trying to use mvn dependenct:get to download the .jar file, but were ultimately uncessful for one reason or another.

This is the job we ended with:

But gives us an authentication error:

But this was still useful though as this what led me to just try to curl that .jar file URL successfully :).

Hopefully this either helped you download a file from GitHub Packages, gives you ideas for other languages, or maybe my struggles convince you to just use a Release in GitHub.

I should mention that for some of these you might need to tweak your GITHUB_TOKEN settings to grant it more permissions.

Let me know what I’ve missed or if you have any other ideas!

Summary I needed to be able to restore my NuGet packages hosted in an Azure Artifacts instance in a GitHub Action workflow. In Azure Pipelines, it’s relatively simple with the Restore NuGet Packag...

Summary This is a very simple bash script that can assist you in migrating NuGet packages to a different Artifact feed. It’s written with Azure DevOps in mind as a target, but there’s no reason wh...