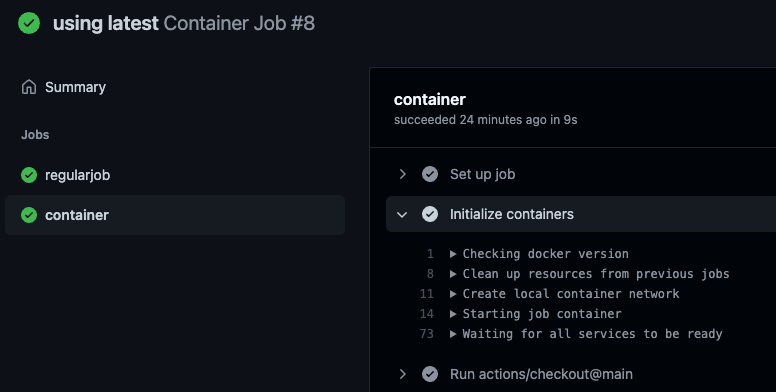 GitHub Actions has a relatively little known feature where you can run jobs in a container, specifically a Docker container. I liken it to delegating the entire job to the container, so every step that would run in the job will instead run in the container, including the clone/checkout of the repository. This generally works well, but there are some tips and tricks that I can pass along that may be helpful, especially if running in a self-hosted runner scenario.

Why would you want to use a container job, you may ask? Well imagine you have a Python application that uses a specific version of Python. Okay, simple enough, we can just use the Setup Python action to install the right version. But what if we also require a specific / non-standard version of Node? And MySQL? We could use a script and install all our prerequisites using apt install, but this takes time. Over dozens of CI jobs, the extra minutes add up and you might even run against the cap of your limit. So instead, we can use a container job that has all the prerequisites our application needs to build / run already pre-installed.

I won’t really be covering it, but there is also the option to run a service container alongside your job. This would be useful if running tests against a containerized copy of a database, for example. The documentation uses Redis as an example. Similar with Docker Container Actions.

Usually, I put the caveats after the implementation, but there are enough important ones here to lead with. If none of these apply, head to the Implementation section.

The full syntax for using container jobs, such as specifying ports, volumes, and options, is available here.

In this example, I am building my own Docker image, publishing to the repository, and using the image in a subsequent workflow as a container job, shown below:

When you run the workflow, you will notice an additional log entry to initialize the container. Subsequently, all steps in the job will run inside of the container:

For those wondering, here is what a sample DOCKERFILE for this looks like - hint there’s nothing special. You can also test this with good ‘ol ubuntu:20.04 (or ubuntu:latest).

Perhaps more interestingly, my workflow for publishing my Docker image is here.

I’ve used Container Jobs in Azure DevOps before, and I was excited to see we had similar functionality in GitHub! This can be much more practical than writing a large script to apt install everything for each job run. Just note some of the caveats, most of which only apply to self-hosted and non-Linux runners.