Let’s face it: Subversion had its time in the sun, but Git is the more modern source control system. If you want to use GitHub and take advantage of all the collaboration and security features, you’re going to want your source code in GitHub. In this post, I describe several options on how to make the jump to Git and GitHub and bring your code (including history!) with you.

Probably the easiest (and yet the least likely you’ll be able to use) is the GitHub Repo Importer (you can use this for SVN, Mercurial, TFVC, and of course, Git). When you create a new repository in GitHub, there is a little blue link that allows you to Import a repository. If you forget to click the link to import a repository at the time you are creating and naming your GitHub repo, you can still import after repo creation if you haven’t initialized the repository with a Readme or .gitignore.

The reason why I say least likely to be able to use is that this requires your SVN server to be publicly accessible from GitHub.com. Most Subversion servers I run into our hosted on-premises, which means you’re pretty much out of luck.

If this does work for you, provide the repository url, credentials, and if applicable, which project you are importing, and away you go.

Note: According to the documentation, the GitHub Repository Importer is not a feature in GitHub Enterprise Server yet.

This is the tool I have the most experience with. Using git svn commands, you can create a Git repo from a repo hosted in Subversion (history included). The larger the repo is and the more history there is, the longer the migration will take. Once the repo has been migrated, it can be pushed to GitHub, Azure DevOps, or any other Git host.

See the official documentation for migrating from SVN to Git with the git svn commands.

The high-level process is as follows:

These commands clone an SVN repository to Git, perform some cleanup, and push it to your Git host of choice. Branches will appear as /origin/<branch-name>. In GitHub/Azure DevOps, you can clean this up by re-creating the branch at the root, e.g., creating a new branch /<branch-name> based on /origin/<branch-name>. You can confirm the commit hashes are the same and then delete the branch under /origin. You can delete /origin/trunk without re-creating it because trunk should have been re-created as master.

Note: In GitHub, when you create a release, you must specify a tag. So, creating a release in the web interface will create a tag. Otherwise, you can use the command line to create tags.

This is what you can expect tags to look like in GitHub after running the migration (as branches): 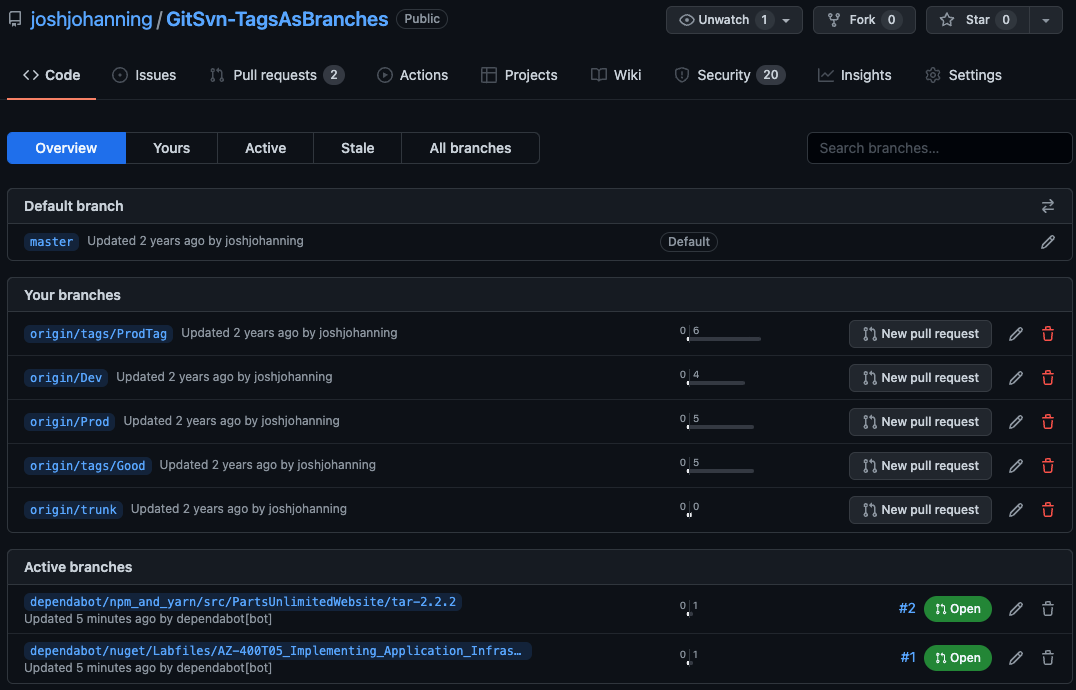 How tags appear in GitHub (as branches) - You can even see that Dependabot created a few branches!

And in Azure DevOps:

How tags appear in Azure DevOps (as branches)

When following the above instructions, tags will appear as a branch /origin/tags/<tag-name>. This is usually fine since branches and tags are just pointers in Git anyway, so whether it appears as a tag or a branch, the referenced commit SHA will be the same.

If you want to see the tags show under the tags page instead of the branches page in GitHub/Azure DevOps, you can manually create a new tag based on the branch in /origin/tags/, or follow the alternative commands below (particularly step #4).

Note: In GitHub, when you create a release, you must specify a tag. So, creating a release in the web interface will create a tag. Otherwise, you can use the command line to create tags.

This is what you can expect tags to look like in GitHub after running the migration (as tags):

How tags appear in GitHub (as tags)

And in Azure DevOps:

How tags appear in Azure DevOps (as tags)

This can be useful if you only want/need history from the last X months or last N revisions cloned from the SVN repository. This can help to speed up the conversion as well as potentially bypassing any errors (such as server timeout). You must pick/find what revision you want to start with manually, though. In this example I am getting everything from revision 3000 to current (HEAD):

You can use an SVN client (TortoiseSVN on Windows, SmartSVN on Mac) or git svn log to help you with finding out what revision to start with. Alternatively, if you want to precisely find the previous N revision, you can use the 3rd party scripts found here.

From the git-svn documentation:

Set the noMetadata option in the [svn-remote] config. This option is not recommended.

This gets rid of the git-svn-id: lines at the end of every commit.

You can compare the difference between adding --no-metadata and not in the examples of my migration runs:

Note that my initial commit in SVN didn’t have a commit message, that’s why it’s showing “No commit message” for most of the files. git svn migrates commit messages with or without --no-metadata.

This is my stash of references I used that may be helpful for you:

GitHub’s importing source code to GitHub documentation mentions another tool you can use as well - svn2git. I do not have any experience with this tool but wanted to call it out here as another option.

I’d be remiss if I did not mention that there’s always the option of just migrating the tip - meaning, grab the latest code from SVN and start fresh with a new repo in GitHub. Leave all of the history in SVN and start fresh in GitHub by coping in the files, creating a gitignore to exclude any binaries and other unwanted files, and pushing. Ideally, you could keep the SVN server around for a while or make an archive somewhere that it would still be possible to view / recover the history.

Understandably, this won’t work for everyone, but it is always an option if the migration options aren’t worth the effort, and you really just care about your most recent code being in GitHub.

Now that you have your code migrated to Git, the hard part of moving to GitHub is behind you. Even if you’re not using GitHub, migrating from SVN to Git certainly has its advantages.

I will note that once the code is in GitHub, it is technically possible to use svn clients to connect to repositories on GitHub, if you’re in GitHub I think it is wise to use Git like everyone else in GitHub :).

Did I miss anything, or have you any improvements to be made? Let me know in the comments!

Overview We all probably know by now that there is some pretty solid first-party support for linking GitHub to Azure DevOps, specifically, Azure Boards, with the Azure Boards GitHub app. Assuming ...

Summary I needed to be able to restore my NuGet packages hosted in an Azure Artifacts instance in a GitHub Action workflow. In Azure Pipelines, it’s relatively simple with the Restore NuGet Packag...

So You Want to Migrate Trac Tickets to GitHub Issues

Disclaimer I should first off state that I wouldn’t entirely recommend this, if you are migrating to GitHub for the first time, you should try to start off with a blank slate. Keep the old tickets...