In GitHub Actions, the GitHub Token works very well and is convenient for automation tasks that require authentication, but its scope is limited. The GitHub Token is only going to allow us to access data within the repository (such as issues, code, packages), but what if you need to authenticate to another repository, or access organizational information such as teams or member lists? GitHub Token is not going to work for that. Your alternatives are:

And don’t worry - you don’t need any programming experience to create a GitHub App!

GitHub Apps are certainly preferred and recommended from GitHub. From GitHub’s documentation, this fits our exact use case:

GitHub Apps are the official recommended way to integrate with GitHub because they offer much more granular permissions to access data.

GitHub Apps are first-class actors within GitHub. A GitHub App acts on its own behalf, taking actions via the API directly using its own identity, which means you don’t need to maintain a bot or service account as a separate user.

Creating a GitHub App is pretty straightforward! I’ll defer to GitHub’s documentation for the details, but here’s a quick overview:

🎉 With the App ID, Installation ID, and Private Key, we now have everything we need to use the app in Actions! 🥳 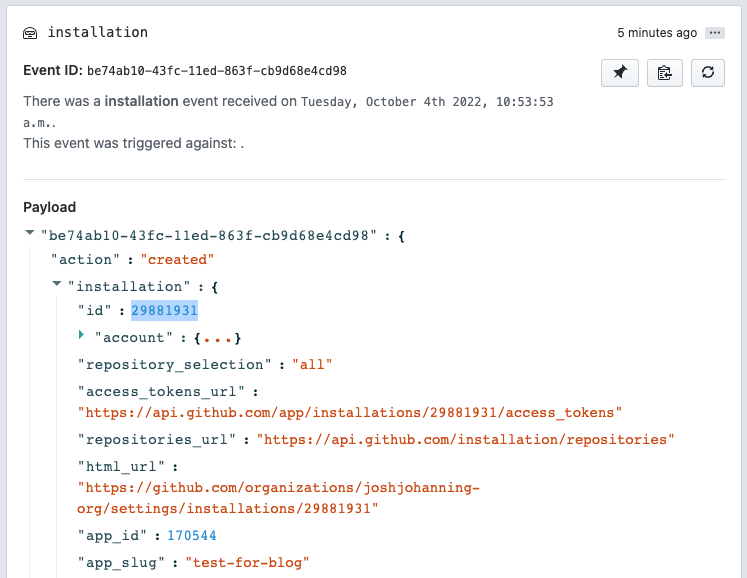 An example of an Installation ID and App ID from a payload in smee.io

Using the GitHub App in a GitHub Actions workflow

There are a couple different actions to use such as:

I like navikt’s, jnwng’s, and tibdex’s versions because it doesn’t require the GitHub App to be installed on the repository that the action is running from whereas peter-murray’s does. That’s fine, but if the App must be installed on every repository, we’re not saving a ton with the app over the PAT (except that the GitHub App’s token has a built-in expiration). navikt’s version is a Docker-based action. I’m typically going to prefer a node-based action if given the preference since typically a Docker action takes a little bit longer to initiate and requires one additional component to be installed if using self-hosted runners. jnwng’s and tibdex’s actions are node-based actions, and both certainly work. I slightly prefer tibdex’s because you can either pass in an installation_id or not, depending on if the app is installed on the repository or not.

It’s really quite simple now that you have the installation ID, the app ID, and the private key. The only prerequisite is to create a secret on the repository (or organization) with the private key’s contents. I named my secret PRIVATE_KEY.

Scenario 1: Using a GitHub App to grant access to a single repository

A customer had a repository that nearly every Actions workflow was going to need to access at deploy-time. For the proof of concept, one of the admins on the team created a PAT and added it as an organizational secret. The problem is though that if the PAT is compromised, that PAT has access to all the repositories in the organization.

With the GitHub app installed on the my-org/my-repo-2 repository and passing in the installation ID to the action, we have access to clone the repository even though it’s not the repository that the workflow is running from. We can also use the token generated here as a Bearer token for GitHub API requests, assuming it has the access.

Scenario 2: Using a GitHub App as a rich comment bot

I’ll often use the peter-evans/create-or-update-comment action to create a comment on a pull request or issue. Typically, I’ll just use the $ for the token which comments as the github-actions bot, and it looks great!

However, if you look closely, you might notice something: since the GitHub Token only has access to the repository, it can’t create the proper @team mention in the comment. There is no hyperlink there. This might not be super important, but in my case the team was going to use their GitHub notifications to check if there were any issues that needed their attention, so this wasn’t going to work.

If we use a PAT and a secret on the repository, we get the @team mention, but it looks like it came from the user who created the PAT:

Instead, we can use a GitHub App that with read-only permissions on Organization / Members and read & write on Repository / Issues to create the comment and then we’ll have the mention as well as not coming from a regular user:

You’ll notice that we didn’t have to pass in an installation ID this time to the action. This is because the GitHub App is installed on the repository, and the action can therefore lookup the installation ID dynamically to get the token.

When I first learned about GitHub Apps, I was like, “This is cool, but I’m not going to be writing an app and creating code just for authentication, that’s too much work, I’ll just use a PAT.” However, as you just saw, we created a GitHub App and used it for authentication without tying it to any code.

In both scenarios, we use the tibdex/github-app-token action and the installation access token that is an output parameter: ${{ steps.get_installation_token.outputs.token }}. We use this token to make authenticated requests to the API or as the password in Git clones. Alternatively, GitHub has sample Ruby code for creating a and signing the JWT and retrieving an installation ID, but the action is so much simpler!

Check out my next post, ApproveOps: Approvals in IssueOps, for more information on the action workflow I’m using in the second scenario.

Overview This is follow-up to my previous post, Demystifying GitHub Apps: Using GitHub Apps to Replace Service Accounts, where I go over the basics of creating a GitHub App and accessing its insta...